In order to gain experience in the construction and operation of large-scale LAr detectors, CERN is conducting an R&D program which operated two prototypes for testing their design, assembly, and installation procedures, as well as acquisition, storage, processing, and analysis of data in beam conditions and with cosmic ray data. Both prototypes are LArTPCs, but employ different detection technologies, one prototype (ProtoDUNE-SP) has horizontal drift, while the other (ProtoDUNE-DP) has a longer vertical drift which is more challenging but enables the construction of a large active volume making efficient use of the LAr volume.

During the first phase of operation of the ProtoDUNE detectors, from 2018 to 2020, the single (SP) and dual phase (DP) technologies were tested. The CIEMAT neutrino group was responsible for the design, installation and operation of the photon detection system of ProtoDUNE-DP and led the scintillation light data analysis and simulations. 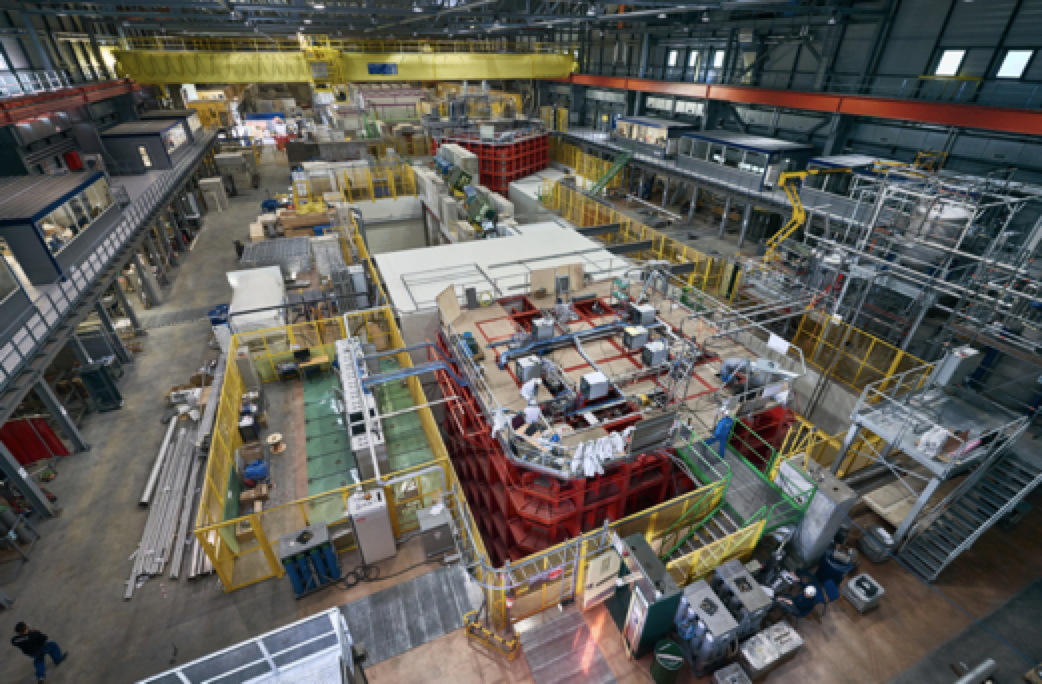 The ProtoDUNE-DP detector was operated from 2019 to 2020 at the CERN Neutrino Platform to demonstrate the LArTPC DP technology at large scale as a prototype for one of the DUNE far detector modules. ProtoDUNE-DP has an active volume of 6x6x6 m3 corresponding to an active mass of 300 t (total LAr mass of 750 t, being the largest DP LArTPC ever operated). In ProtoDUNE-DP the electric drift field is oriented in the vertical direction, causing the electrons to drift vertically towards the anode at the top. The ionization charge is then extracted, amplified, and detected in gaseous argon above the liquid surface by the charge readout planes. The DP technology allows a good signal to noise ratio and a fine spatial resolution enabling the construction of large active volumes making efficient use of the LAr volume.

The scintillation light signal is collected by a photon detection system (PDS) constructed out of photo-multiplier tubes (PMTs). The PDS goals are to provide a trigger and to determine precisely the event time, with capability to perform calorimetric measurements and particle identification. 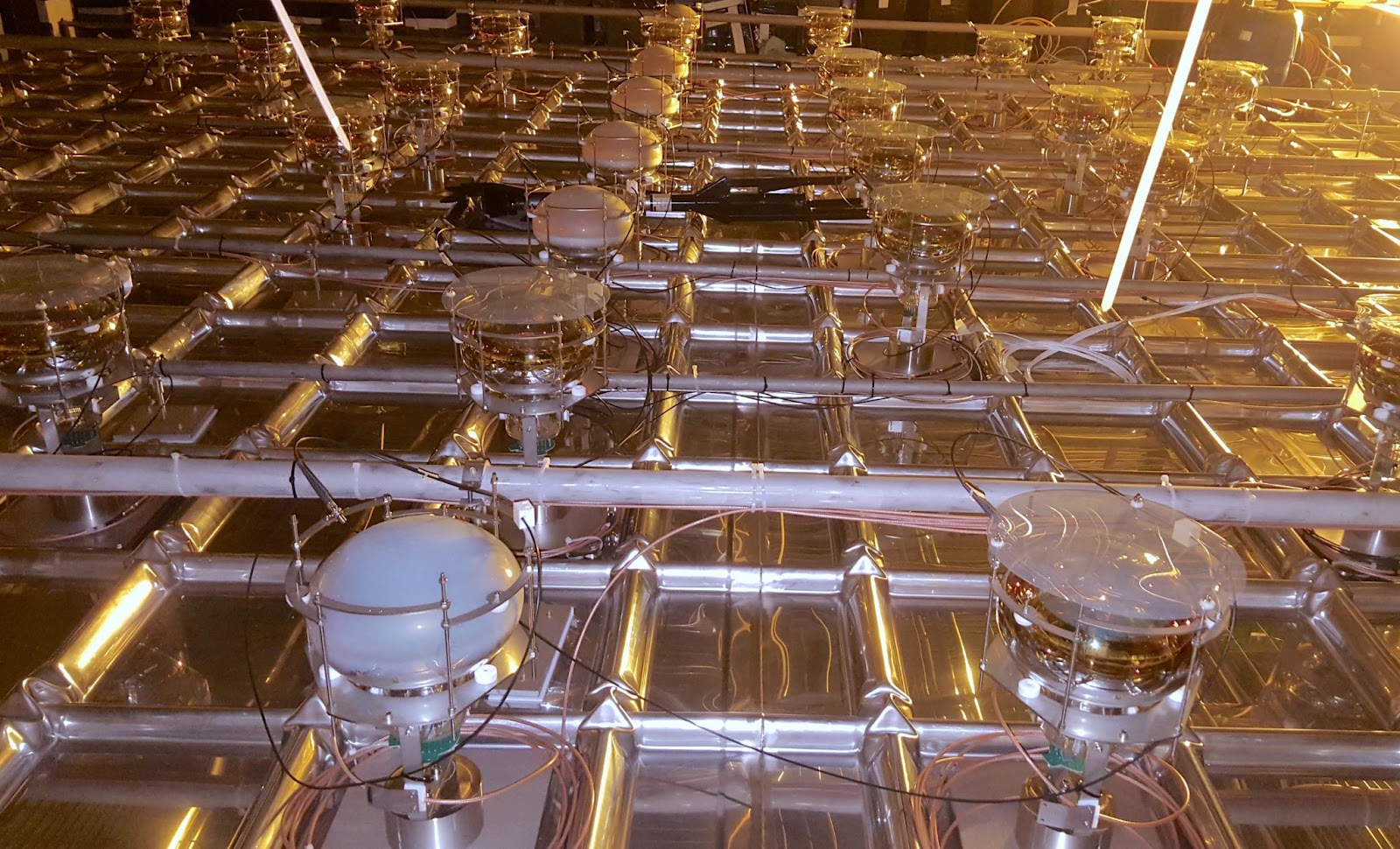 ProtoDUNE-DP PDS formed of 36 PMTs installed at the bottom of the cryostat at CERN. The PMT on the left presents a TPB coating while the one on the right a PEN sheet as a wavelength shifter.

We performed the analysis of the data taken with the photon detection system to evaluate its performance with a particular focus on the different wavelength shifters, such as PEN and TPB, and the use of Xe-doped LAr, considering its future use in giant LArTPCs. The scintillation light production and propagation processes were analyzed and a comparison of simulation to data was performed, improving understanding of the liquid argon properties [arXiv:2203.16134, PhD Thesis A. Gallego, PhD Thesis J. Soto].

As a previous step to ProtoDUNE-DP, WA105, also known as the (3x1x1) m3 detector, was developed. It was a 4.2-t DP LArTPC built and successfully operated at CERN in 2017. The CIEMAT and IFAE groups were in charge of the Photon Detection System mainly composed of 5 PMTs (Hamamatsu R5912-MOD20). The WA105 demonstrator recorded cosmic-ray data in 2017 and the CIEMAT and LAPP groups led the study of the scintillation light production, propagation and collection [JINST 16 (2021) P03007, PhD Thesis C. Lastoria].

(Left) Internal view of the protoDUNE-DP cryostat during field cage setup at CERN's EHN1 area. (Right) Drawing of the ProtoDUNE-DP detector with 36 PMTs positioned at the bottom.

The final design of the Horizontal Drift (HD) technology will be tested in 2023 in ProtoDUNE phase II. An upgrade of the Photon Detection System based on the novel X-ARAPUCA technology, is installed in ProtoDUNE phase II. The X-ARAPUCA is an improvement to the original ARAPUCA design, retaining the original ARAPUCA concept of photon trapping inside a highly reflective box while using a wavelength shifting slab inside the box to increase the probability of collecting trapped photons onto a silicon photomultiplier array.

CIEMAT contributes by testing the Photon Detection System, based on the novel X-ARAPUCA technology, in cryogenic temperature. The gain and dark current rates of more than 70 X-ARAPUCA modules was measured to validate them for installation in ProtoDUNE phase II.

CIEMAT’s laboratory where the assembly and testing of the X-Arapucas takes place.

In addition to this characterization, we are working on determining the efficiency of X-ARAPUCAs. For this, we have developed a setup to submerge the X-ARAPUCA together with reference detectors and an alpha source in LAr, and everything is cooled with LN2 in over-pressure conditions.

An alternative technology of a single-phase module with a vertical (VD) drift will be deployed in the second module, as an evolution of the dual-phase design but renouncing to the gas phase. This is known as the Vertical-Drift design. This approach is being tested to demonstrate its viability and there is a dedicated effort at CERN to build a prototype and validate the design. At CIEMAT, we are working on optimizing the design of the Photon Detection System for ProtoDUNE-VD and are responsible of the light monitoring system.